The girls and I have recently been involved in two very different fundraising efforts.  Both were raising funds for the same cause: the Stellae Boreales tour to Iceland in June/July of this year.  Nobody loves fundraising, but our ensemble does get creative at times.  Our yearly November concert is always followed by a silent auction and last November one of the parents generously offered to host “An Evening of Fine Food and Fine Music”.  It was bid for and bought by four couples.  L16 was enlisted to provide musical entertainment between courses along with another senior musician in the ensemble.  I volunteered to be sous chef and A14 was called on to serve at the table. Vicky, the chef, hosted it at her house and prepared nine superb courses in her tiny kitchen!

The dinner was a huge success.  The musicians played a duet after the guests had enjoyed their amuse-bouche.  Guests were then seated for the next two courses before enjoying the first sonata of the evening. The main course of Arabian Nights Stuffed Quail followed, then L16 played her sonata with our fabulous accompanist Judith Ginsburg.

There were several more courses and two more fine performances from the musicians before guests, chefs, musicians and serving staff adjourned to the living room  more than satisfied with the fabulous food, music and company.

I had a ball assisting Vicky in the kitchen.  She had prepared almost everything in advance so my main task was plating up. For dessert this involved a little “chocolate artwork” with of course a musical theme. 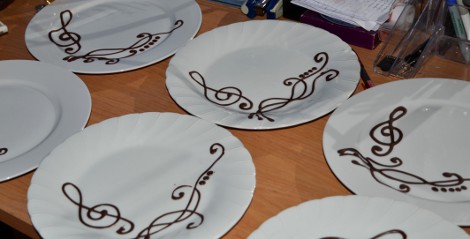 I decorated the plates in advanced and whisked them away to be retrieved later so I could add slices of chocolate terrine with balls of mango and raspberry artisanal sorbets.

All the courses were delicious; Vicky had prepared enough for her staff as well! The event was deemed a huge success by all and will hopefully be repeated next year.