Between Andrew and B14 we have soccer games or practices seven times a week. We are also enjoying some Women’s World cup games in Ottawa. Last week A & A watched France beat Mexico then Korea win against Spain. The week before we joined B’s soccer team to watch Germany tie with Norway then Thailand beat Côte d’Ivoire.

B14’s team has played a couple of tournaments already this season including one this weekend. 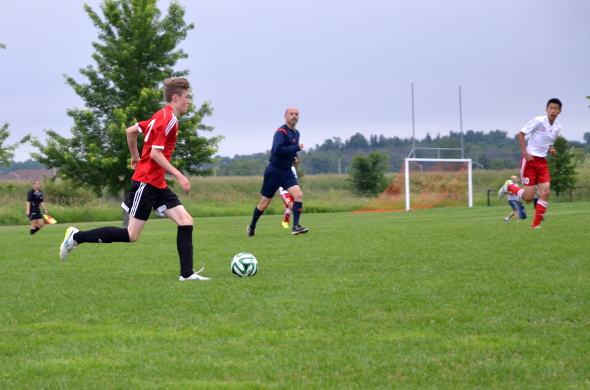 The summer holidays are almost over. Here is a glimpse of what one member of our family spent much of his summer doing.

Spring has definitely arrived so the skis and skates have been put away and other sporting paraphernalia is emerging from the closets and basement. Over the winter Andrew did a cross-country ski course and headed out skiing as often as he could. Occasionally I went with him and once B12 even gave it a go. B12 however was introduced to downhill skiing over the Christmas break and it became the highlight of his winter. He joined a group who skied every Tuesday and he watched the weather from one week to the next in the hope that nothing would Jeopardize the ski day. The season ended for him with a full day of skiing with Andrew who took the day off work and donned downhill gear for a change.

B12 also did a soccer winter skills program in preparation for joining a soccer league this spring. After several years of community soccer he is enjoying the challenge, coaching and more serious nature of his new team.

A16 has been training for track since October but has been plagued by illness and injury. Indoor training ended this week and next week she will compete in her first outdoor meet of the season. As she is now at school she is hoping to represent her school at the Ontario high school championships and her club at various meets over the summer.

After doing very little exercise over the winter I have taken on the challenge of doing a “couch to 5K” running program. It is a free podcast series lasting nine weeks and at the end I will be able to run 5K in 30 minutes. I came across it on Jean’s blog where she is blogging about each week of the program as she completes it. I have not run regularly since high school so it was quite a stretch at first. L18 has joined me and we are now in week 5, half way through. We run three times a week following the program which is a mix of running and walking. Each week the program changes slightly increasing the amount of running and decreasing the walking we have to do. On a couple of the days I don’t run, I swim. L18 has kept up swimming at the university pool through out the school year but I much prefer the convenience and warmer temperature of a more local pool.

I noticed the tennis nets have returned to some of the local courts so maybe Andrew and I will recommence our tennis matches soon. I hope to win one this summer. He has also played a few games of squash lately and had his bike out this week to ride to work as the temperatures have been very nice.

All in all we are getting outdoors and enjoying the warm weather and the snow free ground.

Yesterday Andrew and I went skiing not far from home. Andrew is keen to ski; I am willing to ski but find the whole stopping or turning thing a little tricky. It was beautiful in amongst the trees after two big snow storms. I wanted photos but the temperature was minus 10 °C so my fingers complained every time I pulled them out of my mitts. 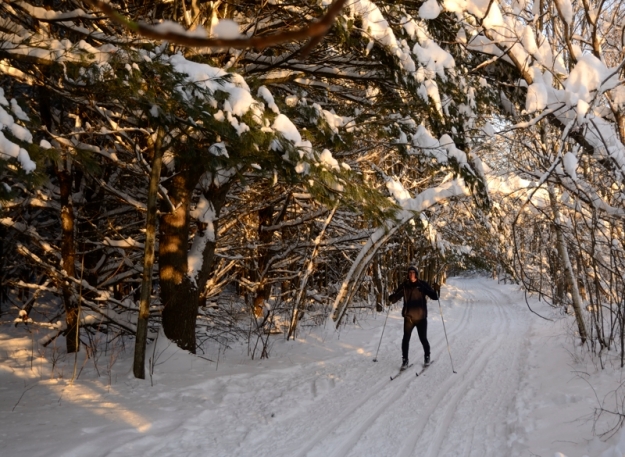 As I mentioned in my last post A16 competed in the National Youth Track & Field Championships in Charlottetown, PEI in mid August. She competed with her team, the Ottawa Lions and had a very successful meet coming home with two relay medals and a personal best time in 300m hurdles. 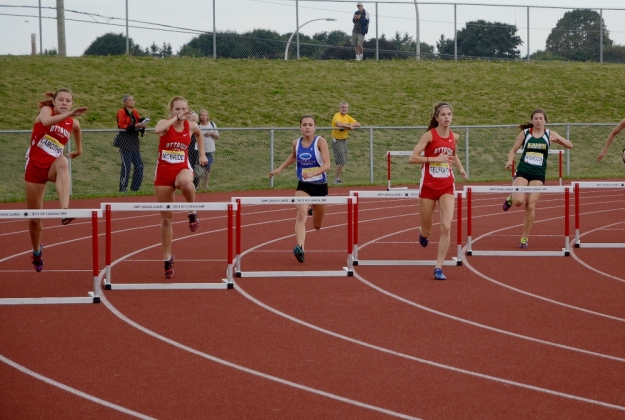 Winning her heat with a personal best in 300m hurdles, her newest event.

The silver medalists in the 4x400m relay. 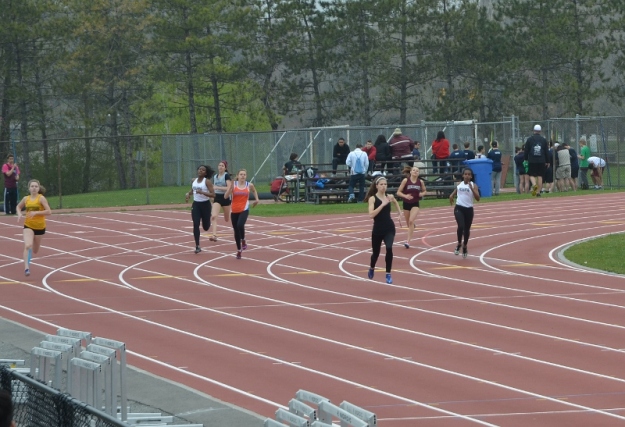 Basketball at the park.

A15 has spent the last three days at the National Legion Youth Track & Field Championships which were held here in Ottawa. After a year of training three times a week it has been a very satisfying and exciting end to the season. Before she left for Iceland she qualified in local meets for the 100m, 200m & 300m sprints in the under 16 age group.  Her times in the 100m and 400m also gave her a place in the 4x100m relay and the sprint medley relay. Club teams and provincial teams from all over Canada came to compete in U16 and U18 events.

The weather all weekend was hot and usually sunny.  I volunteered on the first two days of the meet and was very happy to be given a job in the shade of a tent.  Many volunteers and officials were out in the sun most of the day.  Being a volunteer also gave me the opportunity to watch A15 from the track side if I wished.  Her first race, the 100m heat, can be seen here ; she is in lane one in the first heat shown. She was happy with all her results, but getting a personal best in the 300m, advancing to the finals of the 200m, also with a PB, and medals in both relays were definitely the highlights. 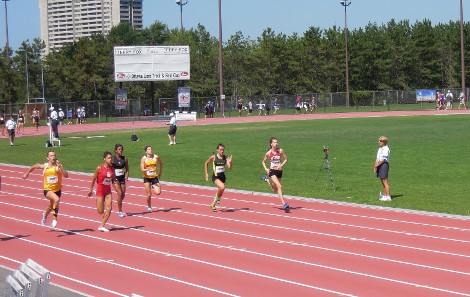 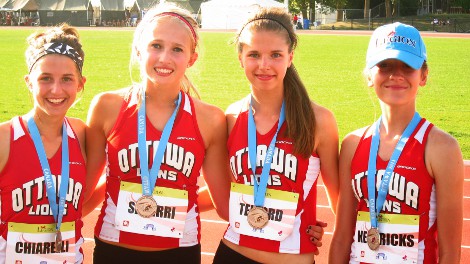 In the photo above you can she is finishing her 400m leg of the medley relay. The medley is a strange race made up of a 400m, two 200m and an 800m. A15 was the first runner and she gave her team a lead which they maintained to the end, winning them the gold medal. Video now available here.

When school ended and the summer stretched out ahead of him B10 had one purchase in mind.  J11 across the road had just bought one and was kind enough to let B try it out numerous times.  When B had the money and had done the research we set out so he could buy his own Ripstik.  It looks like a skateboard but has only two wheels. 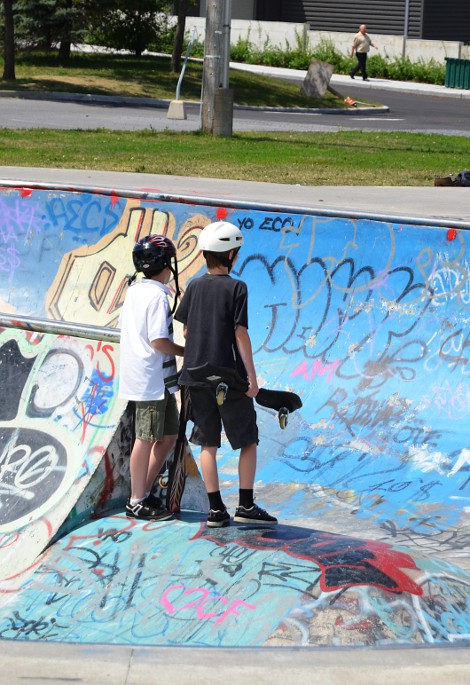 He has fun around our street but what he really wants is to be taken to the skate park. 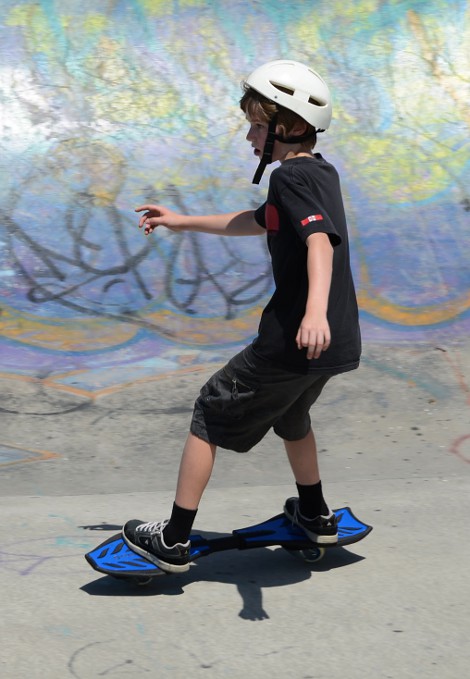 We recently participated in the local homeschool trackmeet.  B10 had a successful and enjoyable day as did the girls.  The track isn’t quite up to the standard of the tracks A14 has been training on but it did the job.  The meet includes several sprints, long jump, standing broad jump and shotput followed by 4×100 relays and an all age 800m.  All the children did all the events and were a little weary at the end. 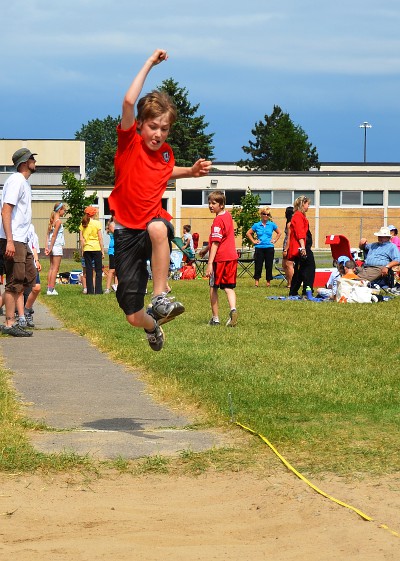 The first two games of the season were cancelled due to wet weather and soggy fields but B10 and our friend P11 are now playing soccer twice a week.  As they both loved the Percy Jackson books, being in the Olympians team is a bonus.  So far they have won once, lost once and tied twice. 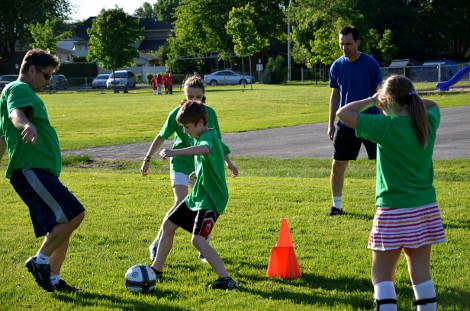 Sentient
Create a free website or blog at WordPress.com.