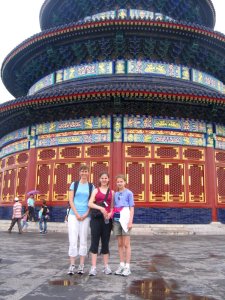 We have had two touring days now and have seen beautiful palaces, courtyards and gardens.  On the first morning we headed to Tian’anmen Square and gazed around at the thousands of people there.  Our guide is a wealth of knowledge and although I am retaining some I really need to be constantly with a notepad to get it all.  From the square we entered the Fobidden City (Palace Museum) which was the residence of the ancient emporers.  We crossed threshold after threshold to enter courtyard after courtyard to see yet another beautiful building.  It was extremely hot and humid.  Just as we felt we could not last much longer we crossed over yet another threshold into the garden for the Imperial family.  This was where they could relax and play.  The trees and water made it just that little but cooler and very pretty.

Yesterday’s tour was to the Temple of Heaven which is surrounded by a park where many people were involved in weekend leisure activities.  We passed a group doing ballroom dancing, a group doing tai chi with paddles and balls, many playing a version of hacksac where the sack was actually a few disks attached to feathers.  As we moved through towards the Temple we encountered musicians, dancers and singers and realised we should be playing there ourselves.  The temple itself was very elaborate as were the surrounding buildings.  (photos are from the Temple of Heaven)

After that we spent an hour and a half at a market, but I will write about that another time.

In the afternoon we traveled to the Summer Palace where the Imperial family went to escape the heat.  It is built around a lake and is not one palace but many buildings and courtyards.  The difference in temperature was very pleasant.  We were able to enjoy the breeze acorss the lake.

Sleep continues to elude me and settle solidly on A11! 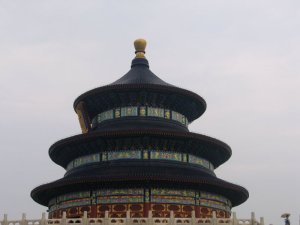 1 thought on “Palaces and Gardens”