Even before we arrived in Hangzhou we were told to expect a beautiful city.  Several people mentioned that it was described by Marco Polo in the following terms,  “Above is Heaven, below are Suzhou and Hangzhou.” It is an attractive city, particularly around West Lake where we were taken for a walk and boat ride.  As our bus traveled past the lakeside residences we saw impressives houses surrounded by willows and gardens.  We saw the place where Chairman Mao had stayed forty times when he came to visit the city.  Our guide encouraged us to come again and again as Mao did. 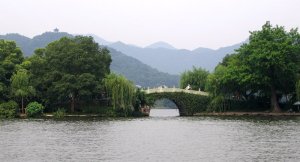 It was hot and hazy as it was most days in China, but we did have the option of staying inside the airconditioned area.  To see the scenery though, you needed to be outside.  We saw many other barges like ours and on the shore and the islands we could see small and large pagodas.  After the ride was over we wandered through the park and admired the gardens, fish and peacocks.  What we really wanted to see though was the popsicle stand, which we found before boarding the bus and heading off to Longjing Tea plantation, where Dragon Well tea is made. 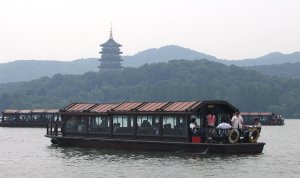 As we drove into the Dragon Well village our guide explained the transformation the village had undergone from being very poor and run down to being the successful and attractive village it is today.  We did not see very much of the tea plantation itself, we walked past a hillside of bushes, a man drying the tea in a huge wok over a burner and then into a room where we were given several types of tea and quite an elaborate sales pitch.

The tea is picked in spring, summer and fall, but only the small new leaves each time.  The spring tea is called daughter tea, the summer daughter-in-law tea, and the fall grandmother tea.  We tasted and smelled the different teas and watched as our hosts packed the tins of freshly made tea.  We were also told many tea customs and various used for tea and leaves.  Once again I saw the Yixing teapots but our guide suggested waiting once more until Shanghai where there would be more choices.

The afternoon was spent rehearsing for the evening’s concert after which we returned to our very comfortable hotel, perhaps the favourite for many people as it had a pool, lovely rooms and great meals.  Before our bus took us to Shanghai the next day we climbed the Pagoda of Six Harmonies.  It was steep but nothing like climbing the wall.  The view of Hangzhou was well worth the climb.  As we drove out of Hangzhou we watched as the city gave way to farmland and the style of dwelling changed once again.  I wish I had photos of the different styles we saw on the outskirts of each city; each one was unique in colour, shape and decoration.