I just finished a reading a book to B9 which we both enjoyed, “Dessert First” by Hallie Durand.  It turns out the main character’s name is Dessert, but the book is concerned with dessert also, along with fondue, temptation and making sacrifices.  We were a few chapters in when B9 asked to move onto a new book.  I did not want to move on because I hadn’t found out yet how the child came to be called “Dessert”!

I thought he would like it as it was, in some ways, like the “Clementine” books we had read last year and enjoyed.  His comment part way through was interesting  as he said it was “trying to be like the Clementine books” but apparently it did not quite measure up.  We continued and were drawn in by the awful secret Dessert was carrying around.

What inspired B9 the most was the  recipe for Double Deckers.  Included on the back cover, he was very keen to try it out.  Finally I had all the ingredients and he made it last week.  It is indeed rich and delicious.  He cut it into 30 portions and is determined that no-one will have more than one a day.  I tried several angles to be awarded a second serve, apparently the girls did too, but it didn’t happen! 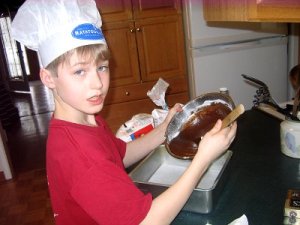 I’m not sure what the deal is with those sleepy eyes of his.  He certainly was not sleepy after eating a sugar loaded “Double D”!