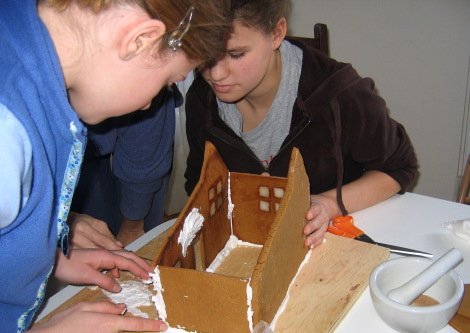 L13 and P12 are fixing the walls of the Little House on the Prairie with icing. You can see a blob of icing on the inside of the house which is my attempt at reinforcement as I picked up that piece while it was still warm and it cracked a little.

H10 is lining the third wall of the pentagonal lighthouse with icing before attaching it to the walls A11 is holding in place. The construction phase finished yesterday and the houses are sitting on our kitchen table waiting for the last of the decorating to happen tomorrow.

It has been a few years since we made a gingerbread house, although we make and decorate gingerbread cookies every year. Often we make plans and dream up elaborate ideas but then run out of time to make the house. This year we have entered a competition so the plans are coming to fruition.

L13 has teamed up with her friend P12. B7, A11 and H10 are working together and the two creations are very different. Initially each team was keeping their designs a secret, but a slip was made and discussions over heard so they shared their plans with each other. As neither house is traditional they had to come up with their own plans. L and A spent quite a while drafting and then made mock-ups with cardboard.

Last night we mixed, rolled, cut and baked gingerberad for three hours, heading off to bed around 11pm tired but very happy with all the necessary pieces for one lighthouse and one replica of the “Little House on the Prairie”. Not only were all the pieces cut, but windows and doors also. Before baking we put white candies in the window spaces which melted to make milky white panes.

Drop in tomorrow and hopefully I will have the next part of the process up for you to see.

During the summer I wrote about a visit we had to a friend’s horse farm where a few episodes of a tv series were being filmed. We were able to go back there recently and do some riding ourselves. Both A11 and her friend H are rather keen on horses and when I spoke to our friends at the farm they were only too happy to give all of us a riding lesson. The weather stopped us several times but the day which finally worked was a beautiful sunny Friday afternoon. It was the perfect way to end the school week.

When we arrived the owner of the horses showed us around the barn and tack room, and then took us out to meet Amigo, who we were to ride. Our hosts had cowboy boots in all sizes as well as riding helmets so we were suitably decked out. Then began the process of making sure the horse felt comfortable with what he was about to be asked to do.

Some people might not take the time that our friend took with Amigo but we could see the benefit in slowly and gently preparing him for an hour or two of giving lessons to us. It was part of his training also, to be calm as all the equipment is put on him. At first he did not want the saddle so it was placed on him, then removed and replaced several times until he calmly accepted it. Finally the bit and bridle were also positioned, removed and replaced until he was settled with the whole deal.

We all enjoyed our rides, even me, in fact I could see that it could be quite a relaxing pastime to ride now and again. But that is very unlikely, so enjoy the pictures.

Ottawa does museums very well. My favourite is the Museum of Civilization, over the river in Hull and we were there twice last week. On Friday we spent the day there to review what we have covered so far in Canadian history. Currently we are looking at the development of settlements and the many groups of people involved in those settlements. The museum has a fantastic exhibit called the Canada Hall which traces Canada’s history from the Viking explorers to modern times. Even though we have been through the exhibit many times we only allowed ourselves to get as far as the Coureur de Bois’ shack this time. As we looked in the hospital we noticed it was Jeanne Mance’s Hospital, that we had read and written about the previous week. There were a few other moments where names and locations suddenly meant more than they had on previous visits.

Face to Face, a new exhibit on the top floor features a variety of Canadians from various periods and people groups. We wandered through, pausing the longest at Samuel de Champlain’s display to see what we could recognise from our studies. Our plan is to spend a day at the museum every month or so to reinforce and complement our studies at home. After lunch we went to the library in the museum and were able to choose a couple of videos to watch. Both fitted in perfectly with the topics we have just covered: The Voyageurs and Rendevous Canada 1606 both films from the National Film Board.

The following day we were back at the museum again as Stellae Boreales was performing in association with the new Glenn Gould exhibit. Although the audience was small the concert went well and was a good rehearsal  for their fundraising concert on November 30th.

This afternoon L13 is playing a solo at a concert organised by one of her friends to benefit an orphanage in Cambodia. Kids helping kids is the name of the organisation and all the performers are under twenty, the youngest being eleven. It was fun to pick up a paper this week and see a picture of the performers next to an article promoting the concert

Next weekend, as part of the Glenn Gould exhibition at the Museum of Civilisation, the performance group both girls belong to will be giving a concert. As you can imagine there is a lot of practising going on and plenty of rehearsals to attend. We finalised the purchase of A11’s violin a few days ago when the violin seller was back in town. She has kept the one she’s had on trial all these weeks. Now we need a new bow and case.

Twelve days ago I invited everyone who drops by here to leave a comment in celebration of my first blog anniversary. I enjoyed hearing from eleven readers; thanks for humoring me.   One comment came from a reader I did not know and she just happens to have the same name as me. I invited A11 to pick the winners after I had written all the names on scraps of paper and held them above her head. Andrew Nordstrum will receive the Ken Duncan Australia 2008 calendar and Heather (yes, the one with the same name as me) will receive the Canadian Panoramic calendar.

Thanks for your encouragement.

By the way, Katherine, you are the cousin I referred to.  It’s always good to hear from you.  And Julie, thanks for making an exception just this once!

We finished our citizenship unit at Group of Four today. Over the past few weeks we have split the group into age 7-10 year olds and 11-13 year olds to cover as much  as possible. Using the material provided online by Citizenship and Immigration Canada we have covered government, symbols, aboriginal peoples, geography, resources,  some history and the rights and responsibilities of a Canadian citizen. To close the unit we picked questions from one of the online practice tests and made quizzes for the children. If you would like to test your knowledge the test is here.

At the close of the session we presented the Canadian citizens with a reaffirmation certificate which states that they “…having reflected on the values, rights and responsibilities of Canadian citizenship, have demonstrated their commitment to Canada by reaffirming their citizenship.” L13 and A11 were not presented with certificates as they are not citizens yet and will not be until their mother and father fill out pages of forms and proceed a little further along the path to being Canadian citizens themselves.

As an avid reader it's always good to have a bookmark or two on hand. Mind you I often read on my eReader or listen to audio books these days. Are you a reader? What format do you use most for reading?