We did a few more snowscapes and then tried a seascape before the class as it was adjourned.  The writers went back to writing and the younger two resumed their ancient history studies.  But I was having too much fun to stop so we found a new time slot and made it a non-mandatory subject.  For this Daisy project I had four students.

The following week we practiced before filling our daisies in with grey shadows where necessary to define their petals and then orange and yellow wash to make their centres. 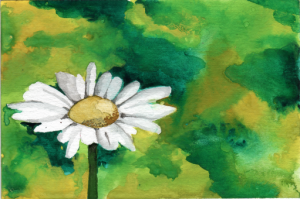 The top one is by A13, she thinks it looks like someone painted a daisy on their camouflage pants.  I don’t have all four to show you because one student was adamant that hers not be displayed this time.  I really liked it, but there was no budging her!  The ones I did in preparation have been added to my painting page.

Vintage bookshelf with the 12"border stamp from @darkroom_door full video on my blog and YouTube channel. Can't get enough of the book stamps from Darkroom Door. Swipe to see the finished cards
Loading Comments...