Our second box from Mike’s garden harvest was delivered on Canada day and included a treat in celebration of the day. We have been promised vegetables but in the box was a little punnet of strawberries and a bunch of rhubarb. Andrew turned them into two delicious desserts, a Strawberry and Rhubarb Crisp with an almond meal topping based on this Raspberry Rhubarb Crisp Recipe and a Sticky Rhubarb and Ginger cake. Both were delicious. I also made a Strawberry and Rhubarb Crisp with the second bunch of rhubarb using a very similar recipe. 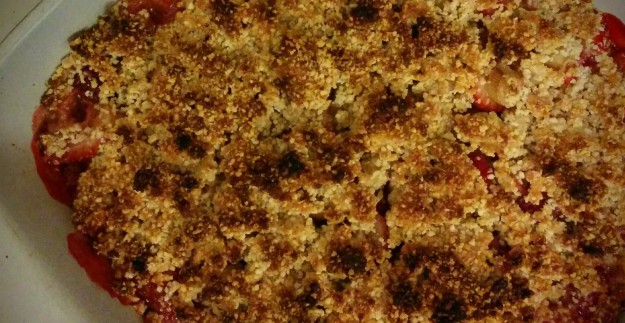 The remainder of the box was made up of more salad greens, radishes, and onions so we kept making salads with fresh, tasty ingredients. Andrew used some of the lambs quarters from the first box in Lentil Burgers which we all enjoyed, even the serious meat lovers.

A pretty paint pour panel turned into a birthday card for a sweet girl. I have only done paint pouring a few times but I was happy to find one of the successful panels waiting in the pile of possibility!
Loading Comments...
%d bloggers like this: