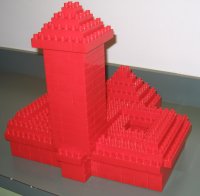 Yesterday we participated in a lego workshop at the Museum of Civilization . Another family of lego devotees joined us. We were expecting to that the children would have the opportunity to work with some lego experts and create some imaginative structures with a range of lego pieces. The reality was a little different and when we walked into the room and saw what was provided for the building session we were not sure the children would want to stay. 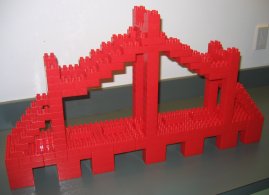 On display was an impressive Mediterranean villa, a tropical resort and a copy of a converted water tower. Two experts from the Parlugment were on hand to talk to the children about making lego creations. There was, however, no lego for the children, instead huge bins full of red duplo sized blocks were provided. The children did express their initial disappointment but there was no talk of leaving. 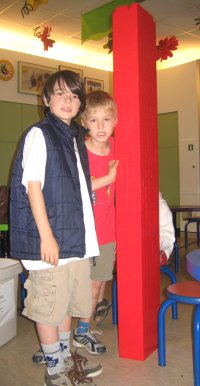 L13 and I left to wander around the Treasures of China exhibit and when we came back we were impressed with what we saw. A11 had constucted the main parliament building, M9 had built the golden gate bridge, J7 a pyramid and B6 was still working on a tour that was to be taller than him. The children did not have a variety of shapes or colours but they did have imagination and ambition.