It has been a few years since we made a gingerbread house, although we make and decorate gingerbread cookies every year. Often we make plans and dream up elaborate ideas but then run out of time to make the house. This year we have entered a competition so the plans are coming to fruition.

L13 has teamed up with her friend P12. B7, A11 and H10 are working together and the two creations are very different. Initially each team was keeping their designs a secret, but a slip was made and discussions over heard so they shared their plans with each other. As neither house is traditional they had to come up with their own plans. L and A spent quite a while drafting and then made mock-ups with cardboard. 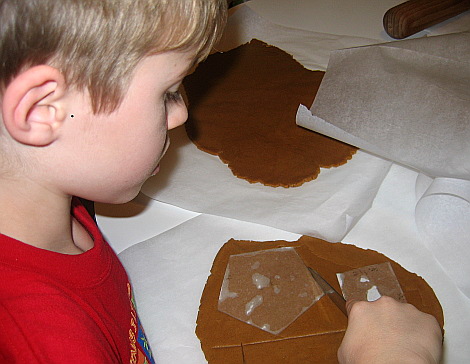 Last night we mixed, rolled, cut and baked gingerberad for three hours, heading off to bed around 11pm tired but very happy with all the necessary pieces for one lighthouse and one replica of the “Little House on the Prairie”. Not only were all the pieces cut, but windows and doors also. Before baking we put white candies in the window spaces which melted to make milky white panes.

Drop in tomorrow and hopefully I will have the next part of the process up for you to see.